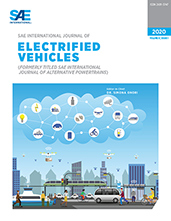 Today the contribution of the transportation sector to greenhouse gases is evident. The fast consumption of fossil fuels and their impact on the environment have given a strong impetus to the development of vehicles with better fuel economy. Hybrid electric vehicles (HEVs) fit into this context with different targets, from the reduction of emissions and fuel consumption to performance and comfort enhancement. Vehicles exist with various missions; super sports cars usually aim to reach peak performance and guarantee a great driving experience, but great attention must also be paid to fuel consumption. According to the vehicle mission, HEVs can differ in the powertrain configuration and the choice of an energy storage system. The electrical energy source often consists of batteries, but also capacitors could be used. The energy storage systems could be limited in energy or power density, depending on their technology. This work explores the hybridization of a super sports car by fitting two electric machines in position P2-P4. In addition, the energy storage system is hybridized by combining batteries and capacitors to get the benefits of both. At first, the hybrid energy storage system (HESS) is obtained by connecting batteries and capacitors in parallel. The research activity shows that such a system could significantly reduce the peak current requested to the batteries and reduce the battery voltage variations, consisting of a simple solution. Later, the connection between capacitors and batteries is regulated by a DC-DC converter to fully use the available energy of the capacitors and actively control the system. Both systems are modeled in MATLAB/Simulink, and they are eventually introduced as part of a hybrid electric vehicle model. The model is simulated on emission cycles and the fuel consumption results are compared with the ones of the conventional super sports car to determine the improvements on fuel economy.
View/Annotate
Content Loading, Please Wait
Document Preview
Content Loading, Please Wait
Document Comparison
Content Loading, Please Wait
Download

You may already have access to the Journal Article, Modeling and Control of Hybrid Energy Storage Systems on a Hybrid Super Sports Car

If you do not have access to SAE MOBILUS via username/password or institutional access, you can still purchase the Journal Article, Modeling and Control of Hybrid Energy Storage Systems on a Hybrid Super Sports Car.