The first installment in a multipart series on the potential lifesaving and cost-saving benefits of an advanced driver-assistance system (ADAS) with forward-looking lidar.

This paper proposes that an ADAS system designed around one forward-facing lidar sensor could prevent 90% of the crashes not currently addressed by ADAS technologies.

Most vehicle crashes are forward-facing and result from driver error. Although automakers are striving to develop advanced driver-assistance systems (ADAS) to prevent these crashes, there is still significant room for improvement. This multipart series explores how adding one cost-effective directional lidar (light detection and ranging) sensor would contribute to the prevention of forward-facing crashes.

According to our analysis of 2016 figures provided by the National Highway Traffic Safety Administration (NHTSA), at least half of all crashes resulting in death, injury, or property damage were multi-vehicle collisions in which at least one vehicle was forward-facing.[1] Altogether, in 2016, this type of crash caused more than 12,000 fatalities; 1,200,000 injuries; and 2,700,000 additional reports of property damage only.[2] These multi-vehicle crashes include front-to-rear collisions, which comprised 32.6% of all 2016 crashes, and head-on collisions, which represented 2.6%. In addition, 20.9% of 2016 crashes were multi-vehicle collisions that occurred at an angle; it is reasonable to conclude that, in the vast majority of angle crashes, one vehicle experiences frontal impact.

In the same year, 15.9% of vehicle crashes involved collisions with fixed objects, such as poles, curbs, ditches, trees, railings, bridges, etc. These crashes resulted in more than 10,000 fatalities; 370,000 injuries; and 778,000 reports of property damage only in 2016. We can infer that the vast majority of crashes with fixed objects that resulted in death or injury were forward-facing.

Additionally, 2.1% of all crashes in 2016 involved pedestrians or pedal cyclists and these incidents were disproportionately fatal, accounting for 16.2% of all fatal crashes, with more than 6,500 fatalities. For both pedestrians and pedal cyclists, most fatalities were the result of impact with the front of passenger vehicles: 87% for pedestrians and 85% for pedal cyclists.[3] Seventy-five percent (75%) of pedestrian fatalities occurred in low light conditions.[4] When we consider collisions with parked vehicles and animals, which combined to comprise 10% of all crashes in 2016, we would expect the same trend to apply -- namely, that most harmful crashes involve front impact. Therefore, even if we recognize that some of these collisions involved rear or side impacts, we can conclude that forward-facing collisions with pedestrians, cyclists, animals, and parked vehicles accounted for approximately 10% of all crashes in 2016.

Combining these figures -- including crashes involving animals, pedal cyclists, pedestrians, fixed objects, and other vehicles, both moving and parked -- we can conservatively estimate that forward-facing crashes cumulatively represented around 76% of the 7,277,000 total crashes in 2016. 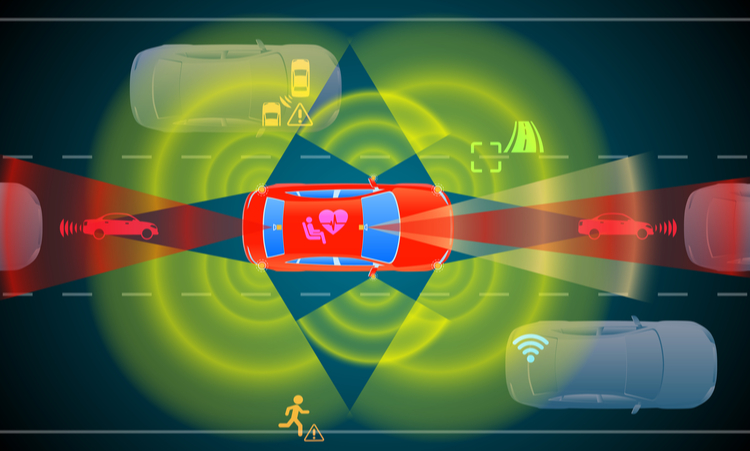 Outlining the opportunity and value of improved performance

A multitude of approaches exists for measuring the total impact of traffic crashes and weighing the benefits of different strategies for reducing the harm that they cause. NHTSA calculated that the total economic and societal impact of traffic crashes in 2010 was $836 billion.[5] This staggering figure has actually increased in intervening years; between 2010 and 2016, traffic fatalities grew by 12% and injuries by 29%.[6] Therefore, utilizing the figure we derived in the previous section, a conservative approximation of the total cost of forward-facing crashes in 2016 is $635 billion (76% of $836 billion). These forward-facing crashes caused at least 27,000 deaths and 1.5 million injuries.[7]

Existing front-impact prevention systems are producing significant benefits in preventing forward-facing crashes. For example, the Insurance Institute for Highway Safety (IIHS) reports that General Motors vehicles equipped with Automatic Emergency Braking (AEB) and forward collision warning are involved in 43% fewer police-reported, front-to-rear crashes than the same vehicles that do not have these features.[8] This information is encouraging, but  also shows that there remains significant room for improvement. This statistic suggests that, even if every vehicle on the road included this advanced driving system, 57% of 2016’s forward-facing crashes would still have occurred. Real-world ADAS performance metrics are rarely published; yet, if we apply GM’s AEB success rate to other forward-facing crash scenarios, we can deduce that unaddressed crashes would have resulted in approximately $362 billion in total societal harm (57% of $635 billion).

These conditions present a tremendous opportunity for companies to improve safety. This paper proposes that an ADAS system designed around one forward-facing lidar sensor could prevent 90% of the crashes not currently addressed by ADAS technologies. Such an improvement would prevent $325 billion in total societal harm (90% of $362 billion). Achieving this benefit by equipping each of the 288 million vehicles registered in the US in 2016 with a high-performance directional lidar would represent a starting value of approximately $1,100 per unit. As will be outlined in Part II, a system designed with one lidar sensor as an essential perception component would greatly enhance the safety performance of advanced driving systems.

Continue on to read Part II of this multipart series in SAE International's Automated and Connected Knowledge Hub.

Dr. David Heeren is the Senior Technical Product Marketing Manager at Velodyne Lidar Inc. Contact him by e-mail at dheeren@velodyne.com.

Dr. Mircea Gradu is the Senior Vice President of Validation and Chief Quality Officer at Velodyne Lidar Inc. Reach him by e-mail at mgradu@velodyne.com.

[2] These statistics are conservative because they reflect reported incidents, which may have involved multiple fatalities or injuries.

Purchase Now
Alert Details
We wanted to make subscribers to the Technical Papers 1998-Present collection aware of an improvement that has been made (if you do not subscribe to this collection, you can disregard this notice). Effective January 2020, SAE has restructured the existing collections to provide a better user experience. Named collections within SAE MOBILUS will be better aligned to reflect the content contained within. The collections will now be broken out as follows:

- Conference Journal Articles 2018-Present: includes all event/conference papers that have been selected for journal publication and SAE International Journal of Advances and Current Practices in Mobility, which publishes the top papers from SAE events

Please note that there is nothing you need to do at this time and access to your content will not be affected.