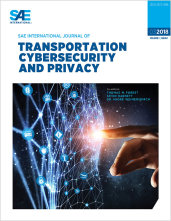 Cyberattacks on financial and government institutions, critical infrastructure, voting systems, businesses, modern vehicles, and so on are on the rise. Fully connected autonomous vehicles are more vulnerable than ever to hacking and data theft. This is due to the fact that the industry still relies on controller area network (CAN) protocol for in-vehicle control networks. The CAN protocol lacks basic security features such as message authentication, which makes it vulnerable to a wide range of attacks including spoofing attacks. This article presents a novel method to protect CAN protocol against packet spoofing, replay, and denial of service (DoS) attacks. The proposed method exploits physical unclonable attributes in the physical channel between transmitting and destination nodes and uses them for linking the received packet to the source. Impurities in the physical channel and imperfections in design, material, and length of the channel are contributing factors behind physically unclonable artifacts. The lumped element model is used to characterize channel-specific distortions. Nonparametric modeling is used to estimate distortion distribution, which is used for transmitting node identification. Performance of the proposed method is evaluated on a dataset collected from a CAN network with channel lengths of 1 to 10 meters. Detection results show that the proposed method achieves average accuracy of 99.8% with a false positive rate of 0.2%.
View/Annotate
Content Loading, Please Wait
Document Preview
Content Loading, Please Wait
Document Comparison
Content Loading, Please Wait
Download

You may already have access to the Journal Article, Exploiting Channel Distortion for Transmitter Identification for In-Vehicle Network Security

If you do not have access to SAE MOBILUS via username/password or institutional access, you can still purchase the Journal Article, Exploiting Channel Distortion for Transmitter Identification for In-Vehicle Network Security.